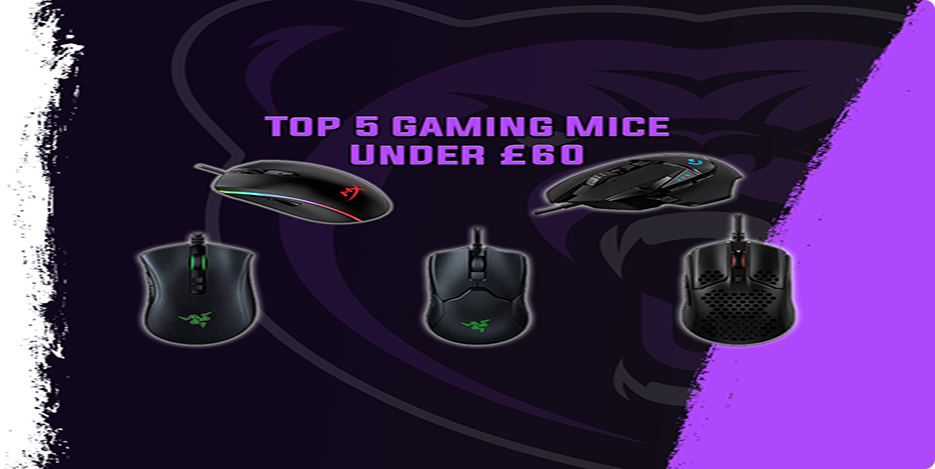 What are the best Gaming PC Mice for under £60?

Choosing your gaming mouse can be a daunting task especially due to the variety that the near infinite gaming market has to offer. Whether it’s to boost your trigger finger in those heated PVP’s or just to complete the sleek new look of your high-end gaming machine.

These are GlitchTech Gaming's Top 5 Best Gaming PC Mice of the Year 2021!

Starting our list of the Top 5 Gaming PC Mice for under £60 is the HyperX Pulsefire Surge.

This is the cheapest mouse on the list but don't let that fool you, it's made it in to our Top 5 after all!

The Pulsefire Surge weighs in at 132g making it a bit heavy in comparison to some other Gaming PC Mice.

The Pulsefire Surge makes up for its lack of customisation with its sense of style. The sleek black finish with the RGB Light Ring give this gaming mouse an added sense of style.


You Can Purchase The HyperX Pulsefire Surge On Amazon Here*

In the Number 4 spot of our Top 5 Gaming PC Mice for under £60 is the HyperX Pulsefire Haste.

The Pulsefire Haste really is the bee's knees. With its lightweight, honeycomb shell weighing in at a measly 59g.

The Pulsefire Haste is also customisable with HyperX's NGENUITY Software. This allows you to customise each of the 6 buttons to your unique playing style.

The 6 Programmable buttons are enough for any gamer whether your game is RPG, FPS or MMO, you'll soon find yourself among the big leagues.


You Can Purchase The HyperX Pulsefire Haste On Amazon Here*

Taking the Number 3 spot of our Top 5 Gaming PC Mice for under £60 is the Razer DeathAdder V2.

The DeathAdder V2 has been around since 2016, and with good reason.

Weighing in at 82g the DeathAdder V2 is lightweight. It also contains a best in class 20,000 CPI sensor - even without a mouse mat it is snappier and more accurate than its competitors.

The new 'Speedflex Cable' gives the user complete freedom to move the mouse wherever it is needed. We barely even noticed it had a cable when we were testing it.

The DeathAdder V2 is, in our opinion, one of the best Gaming PC Mice available at this price point. The one downside is build quality.


You Can Purchase The Razer DeathAdder V2 On Amazon Here*

Up at Number 2 of our Top 5 Gaming PC mice for under £60 is most expensive on the list. The Razer Viper.

The Viper weighs in at only 69g, just 10g heavier than the Pulsefire Haste.

The Razer Viper has a 8000HZ polling rate which means this gaming mouse can communicate its position and click to your Gaming PC up to 8,000 times per second for near-zero input latency and a level of speed you've yet to truly experience.

The Viper offers speed, stealth and superior quality. Everything you would expect for a gaming mouse in this price range.

The one negative to this gaming mouse is its high price, which is the reason why its number 2 on our list.


You Can Purchase The Razer Viper On Amazon Here*

Taking the top spot in our Top 5 Gaming PC Mice for under £60 the Logitech G502 Hero.

The Hero G502 Weighs in at 121g making it the second heaviest gaming mouse on this list, this adds to the premium feel.

This Logitech Hero G502 is brilliant for both beginners and pro's a-like. This is down to its competitive price, high specs and sleek ergonomic design.

You see this gaming mouse everywhere, and for good reason, it is in our humble opinion, the best Gaming PC Mouse of 2021.

Considering it's the second cheapest mouse on our list, what more could you ask for?


You Can Purchase The Logitech Hero On Amazon Here*

*We make a small commission from items you purchase on amazon through our site.